How an environment can be created that supports the sector in its advocacy.

Find below a summary of the recent work that the Helping Things to Happen working group have been undertaking in order to achieve their vision.

Collaboration in the Historic Environment Sector

The Helping Things to Happen working group have been developing proposals for a new way of working collaboratively beyond 2020 and used the opportunity of Heritage2020's annual foresight workshop to explore this issue further.

The one-day workshop took place in March 2019 at the National Trust in London. It saw 28 representatives of groups that facilitate sector collaboration come together to explore collaborative working in the historic environment through a series of three sessions, each discussing a different aspect of collaborative working.

#HeritageChat on Collaborative Working in the Historic Environment

A detailed summary of the #HeritageChat is available here.

A cross-sector priority for the historic environment is supporting the development of digital tools and ensuring the sector is ground-breaking in its use of digital media. To help towards this, the Heritage 2020 Helping Things to Happen working group organised a workshop in March 2018 to explore ‘what’s over the digital horizon for heritage?’ and followed it up by hosting a twitter chat exploring the theme.

‘What’s over the digital horizon for heritage?’ workshop

On the 8th March 2018, Heritage 2020 held its yearly foresight workshop on a digital theme, and asked the question: what’s over the digital horizon for heritage? Participants came together to discuss opportunities for collaborative working and in groups were asked to identify a single ‘digital ambition’ for each of the following four themes: 1) New audiences; 2) Skills; 3) Conservation management; 4) Re-use of data.

Find out what they came up with by reading a detailed report on the day here.

#HeritageChat on Digital Technologies and Heritage

The H2020 Helping Things to Happen working group hosted a twitter chat on the 19 April 2018 that explored he topic of digital technologies and heritage and asked the question: what’s over the digital horizon for heritage? Participants tweeted about how digital technology can be used to stimulate engagement with new audiences, how we can use technology and data to better understand audience needs, what new digital skills the sector needs and what the opportunities are for the historic environment sector to forge partnerships with tech organisations.

You can read a more detailed summary of the #HeritageChat here.

The Heritage 2020 Framework document outlines the vision and priorities for collaboration for each working group.

The Heritage 2020 Framework document outlines the vision and priorities for collaboration for each working group.

The key priorities that were identified for collaborative action by the sector, working together are:

The working group has considered these priorities, and discussed the associated issues. A mapping exercise has been carried out that identifies activity in the sector and opportunities for collaborative working. The group has identified its first actions for 2016-17.

As a result of the sector working together, the group seeks to achieve a long-term shift to a positive vision for the contribution that heritage makes to Britain.
The first set of actions towards this focus on better understanding, and reinforcing, the evidence base demonstrating the social and economic value of heritage to society so that it can be communicated powerfully to Government. 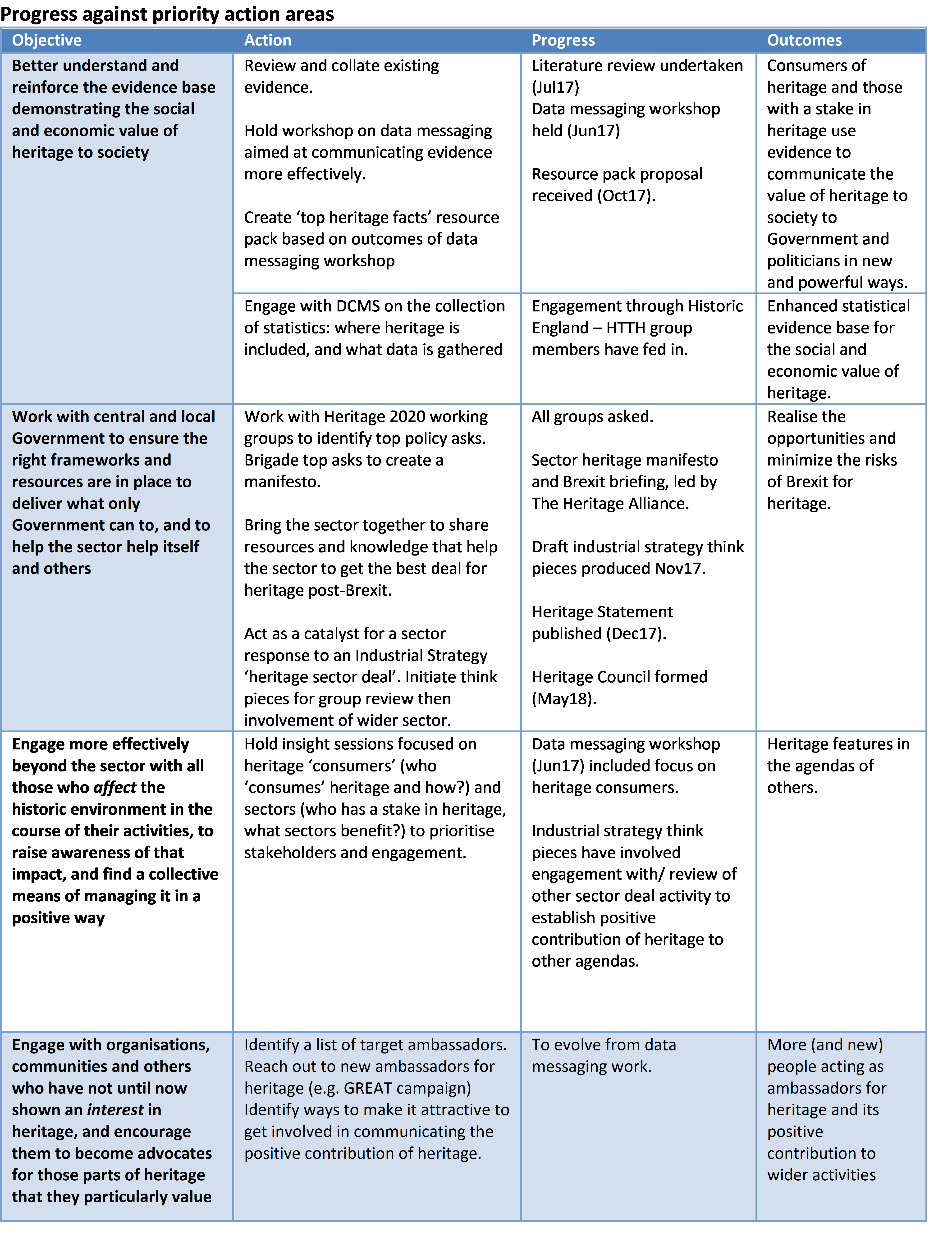 The following people contributed to the Helping Things to Happen working group over the course of the Heritage 2020 programme.

The group has been meeting regularly and virtually since autumn to share information and approaches, and develop collaborative approaches to the following issues: Brexit, post election analysis, and now COVID-19 responses.

The group has also been leading on work to consult on and develop a model for collaboration by the Historic Environment sector in England. Following support for a proposed 'new model Historic Environment Forum' from HEF at its meeting in October 2019, and close engagement with Historic England, a bid to the National Capacity Building programme was developed in October and submitted in November 2019. This is now being re-worked.

Recently, the group has also acted as a sounding board for initial development work by Historic England on scoping a 'Heritage Observatory'.

The group looked at how the outputs of a new collaboration model identified at the last meeting can be achieved in practice and discussed funding models that could enable this to happen.

The group discussed the follow up report on the 2019 Heritage 2020 foresight session and suggested minor amendments. The group also built on their conversations from the previous meeting about adopting a new model for collaborative working in the historic environment sector.

The group discussed preparations ahead of the next Heritage2020 foresight session and decided that each member should think about how the sector could work together in the future before the next meeting. The group then began discussing the need to develop a model for collaborative working in the historic environment sector and how this could be organised. It was agreed that it would be better to think about the functions that are needed by the sector or problems to be addressed by working collaboratively.

The group met on the 18 July 2018 and discussed the work that had been done to date to collect sources of sector evidence and how that could be shared with the sector in the form of infographic resources on the five themes identified in the group’s data messaging workshop of June 2017, plus an additional theme of health and wellbeing. It is intended by the group that the infographics can be used by the wider sector for advocacy work. However, there are some areas of evidence missing and the group identified potential people/organisations that might be able to help to research and fill these gaps.

The group discussed its work to develop briefing papers on four ‘industrial strategy’ themes of skills, tourism, science & infrastructure and re-use/regeneration and the potential benefit of also using this work to inform Heritage Council discussions. The timing of other industrial strategy sector deal work was discussed, and how the heritage sector could align to the work of other sectors and show where heritage makes a positive contribution. It was agreed that the four strands should be developed further and wider reference groups for each should be identified.

The group met on 21st March and carried out a thorough review of its Action Plan to assess progress and ensure it is still fit for purpose. On the topic of ‘evidence’, the group returned to the issue of plenty of evidence being available, Heritage Counts being a good vehicle for the presentation of data, but a potential gap in how individual organisations are using evidence to support arguments about the value and positive contribution of the historic environment.

The group then discussed preliminary work that had been carried out on themes for a heritage industrial strategy. It agreed that the next step is to review which elements are best placed in a ‘heritage’ sector deal and which could be integrated in other sector deals. The group discussed the benefit of carrying out this analysis not only in terms of the sector’s alignment to the Industrial Strategy, but also to contribute to the work of the Heritage Council.

The group met on 6th June 2017 to discuss progress on the areas it had identified as a priority for action. It reviewed the data messaging workshop held earlier in the day, the goal of which was to help the sector make better use of existing evidence. The workshop had prioritised two key audiences, developed associated narratives, and had highlighted where key data is missing. Next steps are for the workshop facilitator to develop resources that can be used by the sector. The group discussed the potential to develop thinking around a ‘heritage sector deal’ in response to the Industrial Strategy. Work on sector statistics was reviewed, with Natural England’s MENE survey identified as a potential model for Taking Part. Information sharing post-election was also discussed, in consideration of targeted communication between minsters and MPs and member organisations. Wider Heritage 2020 topics that were covered, included the need to allocate dedicated time to assessing if and where working group activity crossed over at the next HEF subcommittee meeting on 11th July 2017; and the 2018 Foresight session. The group agreed to develop session outlines for three themes (digital, climate change, health and wellbeing) with the decision on which theme will be used for the Foresight day to be made at the HEF subcommittee meeting.

During this meeting, the group discussed mechanisms for addressing the perception of heritage as a barrier to growth and identified the Housing White Paper, the Historic England triennial review, and the Industrial Strategy as forthcoming opportunities.

The group discussed feedback from the Heritage 2020 consultation that ran at the end of 2016. It noted the requests for evidence of the tangible benefit of heritage and for both the Helping Things to Happen working group and Heritage 2020 as a whole to act as a representative of the sector. The group agreed that they would bring together people who are involved in, for example, consultation responses and Brexit work so that they can work together. It was agreed that the the group would not provide individual responses, but would work to provide an over-arching narrative to support a shift in perceptions around the value of heritage.

The group reviewed its work on the literature/evidence review and associated 'key facts'. It discussed the proposal for a workshop that would help to match data to audiences and generate resources that would help people communicate key heritage facts more powerfully.

The group heard updates on the work of the other Heritage 2020 working groups and was particularly interested in the Public Engagement group's focus on diversity, and the opportunities that presented for complementary activity.

The Helping Things to Happen group discussed the evidence that exists around why people engage with heritage and how heritage influences/affects individuals. The National Trust has contributed the time of an intern to bring together a clear evidence base to show the power of the historic environment in shaping a shared cultural identity. The group discussed evidence sources and the process of bringing together such data.

The group then turned its attention to how to communicate evidence effectively. The role of comparisons in making existing facts more powerful was highlighted and the group agreed to pool key facts with the aim of producing a resource that can be used by the sector to support their arguments on the value of the heritage sector.

Bringing together senior members of staff from public and non-government bodies to work collaboratively on strategic matters for the historic environment sector.